Everything you need to know about the bee-eaters in Norfolk

Like rainbow clad rock stars, European bee-eaters know how to get a crowd buzzing. Sightings of these colourful characters are increasing in the UK and this year eight can be seen in Norfolk. Here’s all you need to know about these avian A-listers.

Tell me about bee-eaters

There are 27 different types of bee-eaters in the world, mostly found in Africa and Asia. As the name suggests, most like to eat bees and other flying insects such as dragonflies. They sit patiently and then dart out from a perch and catch them in mid-air. Once caught they bash the bee or wasp against a branch to remove the sting and venom.

I want to see bee-eaters!

You can! And from the comfort of your own home. Just check out our webcam to see what the bee-eaters are up to right now.

Which type of bee-eater are we seeing in the UK?

It’s the European bee-eater. These technicolour wonders normally nest in southern Europe and north Africa before heading down to southern Africa in winter. Like many bee-eaters, they like company, nesting together in small groups where they can be heard chattering away with a “prrrp prrrp prrrp” call.  They’re not scared of getting their beaks dirty and dig their own nest holes in sandbanks or quarries. They usually pair up for life, with males serenading the females with songs, aerial courtship displays and gifts of food.

Where do we start?  They’re a slender bird around the size of a starling with long pointed black beak. Their feathers are a riot of shades which look like they have been handpicked by either an eccentric fashion designer or an imaginative five-year-old child. Bright bursts of yellow, contrast with rusty reds, marine blues, vibrant oranges and dark greens. Males and females look pretty similar with the younger birds generally paler all over. 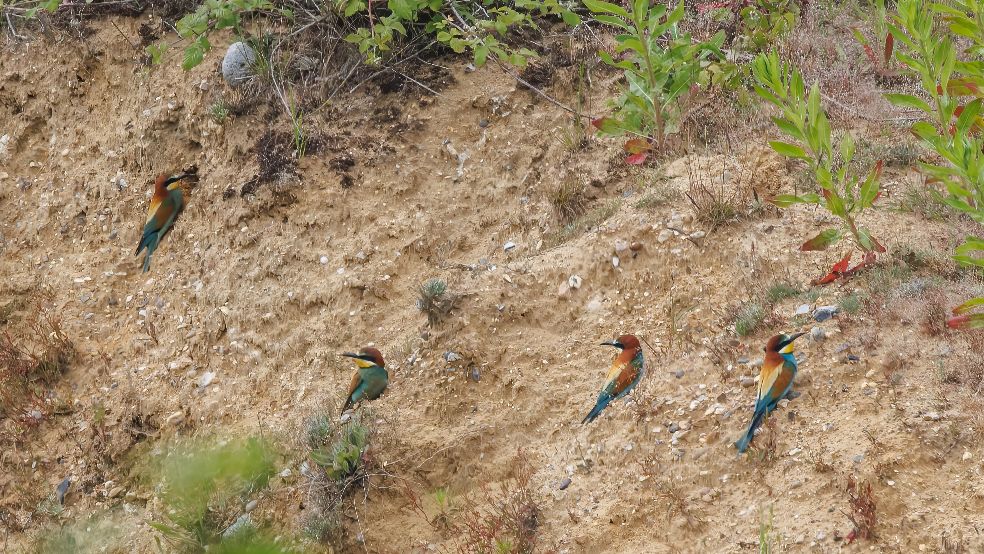 Where are bee-eaters nesting in the UK this year?

Eight bee-eaters have taken up a summer residency at a disused quarry in Trimingham, near Cromer in Norfolk. They were seen making nest burrows and we now know that there are at least two pairs incubating eggs.  Males and female split the babysitting duties, taking it in turns to sit on 6-7 eggs. They usually take around 20 days to hatch – so watch this space!

How long will they stay?

All being well they will stay until the end of August before they head off back down to southern Africa.

Should we be worried about the bees?

In short, no.  Bee-eaters search a large area for food and eat many different types of flying insects including different species of bee. We don’t expect this small colony to make a big impact on local bee populations. 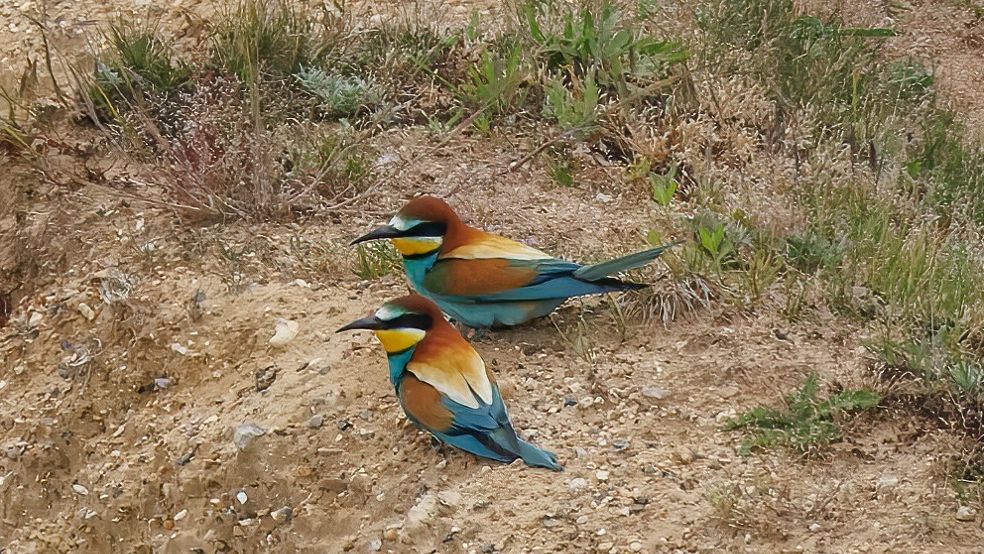 Have bee-eaters nested in the UK before?

Yep. This is the sixth time since 2001, and their visits to raise a family here seem to be increasing. The previous nest sites have been all over – from the Isle of White to Cumbria to County Durham. The last time was in Nottinghamshire in 2017 and thousands of people flocked from all over the country to see the birds of many colours.

Why are sightings increasing?

There are a combination of factors, but climate change is thought to be playing a major part. It looks like their range will continue to extend northwards, so these exotic birds may become a more regular site here in the UK.

Can I visit the bee-eaters in Norfolk?

Yes! There is now a viewing area near the nesting site, and a car park. It is located to the east of the quarry in a large grass field off Gimingham Road at TG284384 or what3words.com/bars.september.worked

Here’s a link to the Google map of the location.

How to get to the bee-eaters:

By bus
The Coast Hopper CH2 runs from Cromer and stops in Trimingham, from the bus stop it is then a 5 minute walk to the site. The timetable can be found here.

By bike
The site is accessible by bike and is a 20 minute ride from Gunton train station, through quiet back lanes.

By road
We are accessible from Gimingham Road, parking costs £5 and we only accept cash. Find us on Google Maps here. 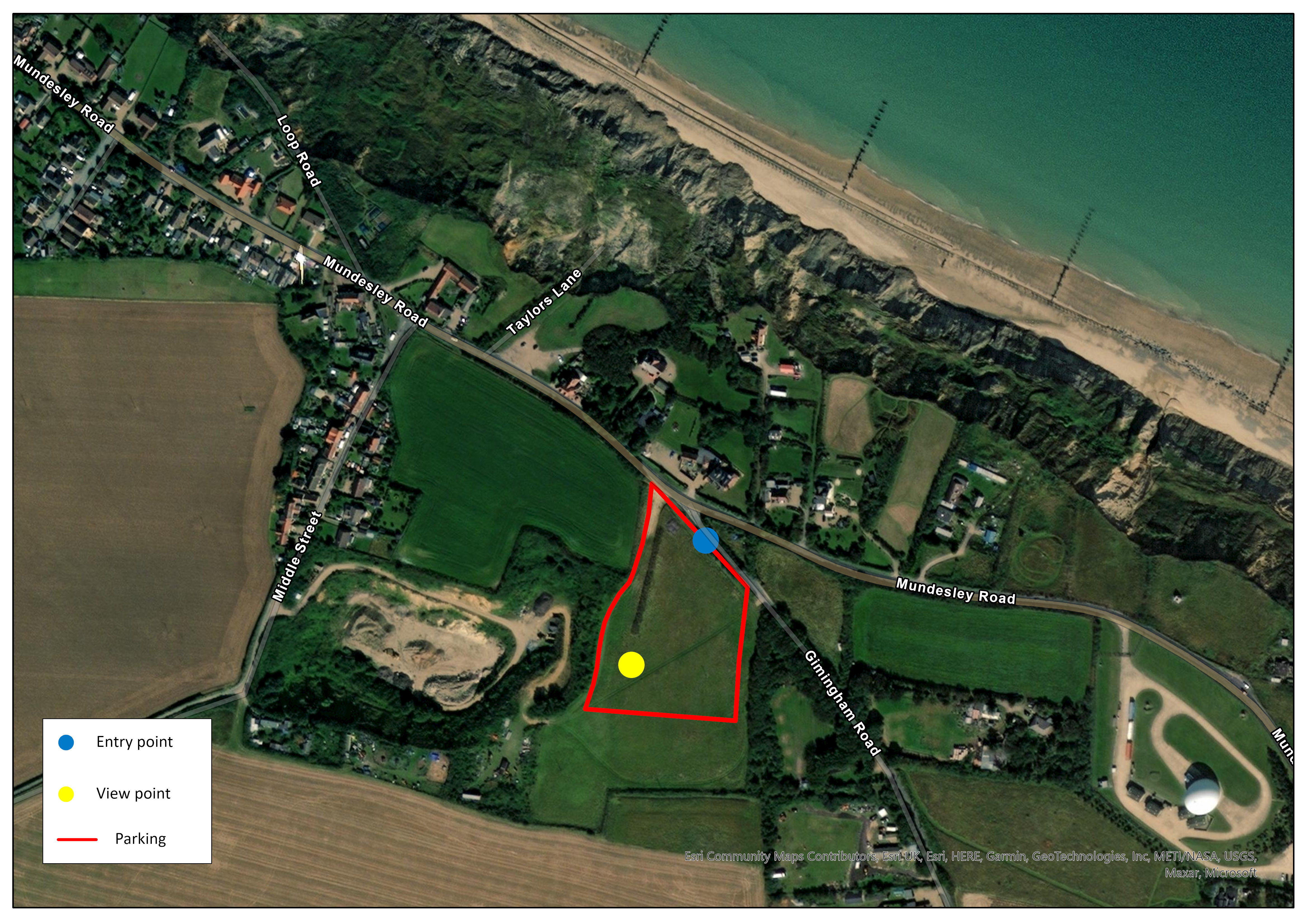 Is the site accessible?

Yes, there is easy access to the viewpoint. The grass is flat and it is not far from the car park. Those less able can park at the viewpoint – just speak to the wardens as you arrive.

What’s the best time of day to see them?

Mornings usually have less visitors and can give you the best light for those perfect pics. The birds have been playing to the crowds and seem to stick around, only taking short foraging trips but never leaving the site for long. We can’t guarantee anything when it comes to wildlife, but you stand a very good chance of seeing them.

Are the RSPB involved?

Yes, we have teamed up with the landowner and the North-East Norfolk Bird Club  to monitor the site.  Members of the team together with an amazing group of volunteers, are there 24 hours a day to try and protect the birds from any harm.

Keep up with the bee-eaters

Keep up with the bee-eaters