It’s always a thrill to see mighty birds of prey, but it’s not always easy to tell what they are. In this guide, we look at some of the more common raptors that grace our skies.

Raptors you’re most likely to see 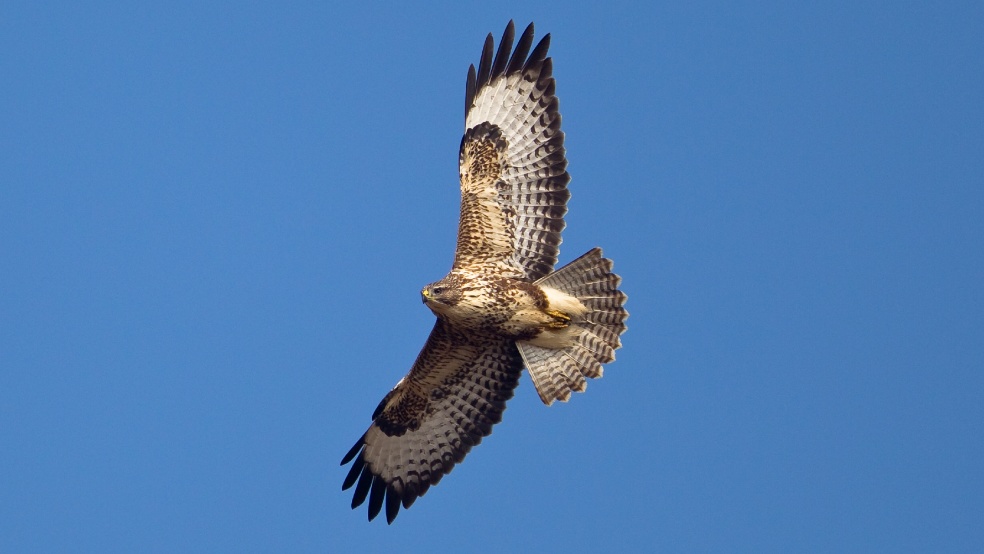 Meet the UK’s commonest bird of prey. Large and bulky, you’ll often see buzzards soaring on the thermals on a hot summer’s day. Listen for its rather meek call – a cat-like mewing that belies this big bird’s power. Buzzards are variable in colour, from all dark brown to much paler variations. All, however, have dark wingtips and a finely barred tail. You may also see them on tree stumps or posts, large and hulking. Buzzards are often on the lookout for carrion as well as live prey, and will scan from the air or from a perch. You may even see buzzards walking about in fields, hunting for invertebrates such as worms, grubs and beetles. 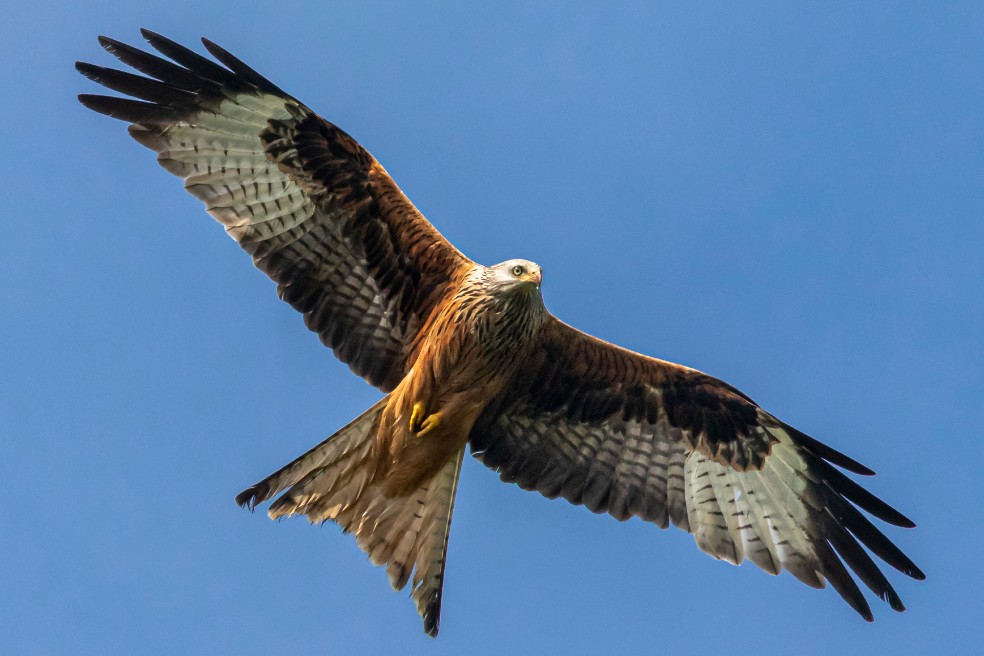 Red kites are bigger still, with a wingspan of around 1.5 metres. Look for a forked tail to confirm it’s a kite you’re seeing. Then marvel as it pivots and turns its tail like a rudder, navigating the skies. The lower a red kite flies the better chance you have of seeing the rich red colourings, which give this bird its name. Its head, undertail and part of the wing is a silvery-white, while the rest of the body a mixture of red and brownish plumage. Red kites too have a soft mewing call and somewhat of a wail when closer to the nest. They are less vocal than buzzards though, tending only to call when in flocks. 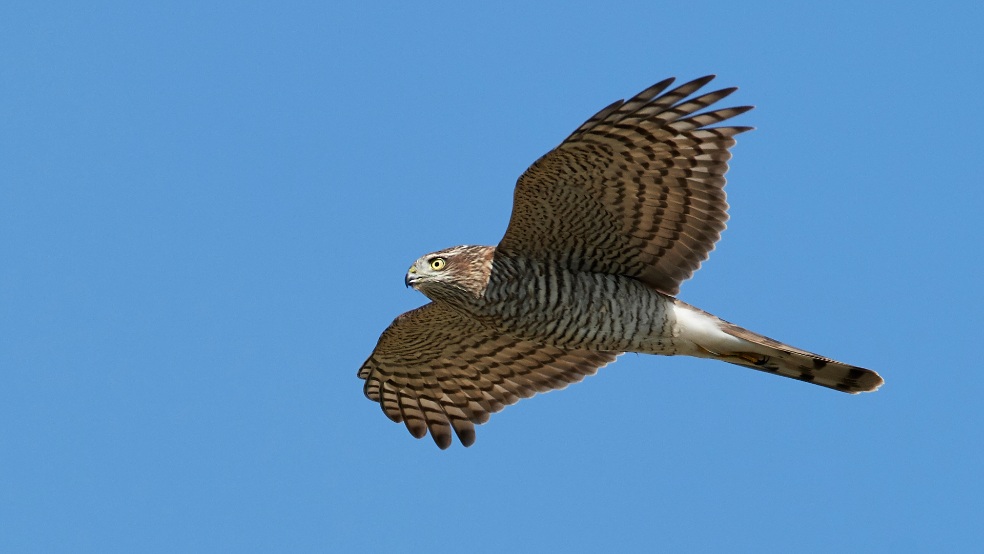 For one of our smallest birds of prey, sparrowhawks pack a mighty punch. These are the raptors that you are most likely to see in your garden, opportunistically preying on the birds on your feeder. They’re fast flyers, experts at catching sparrows, tits and finches by swooping down to attack or cunningly catching them mid-flight. When not hunting, these birds often fly with a ‘flap-flap-glide’ rhythm. Like buzzards, they will also use thermals to gain height, but their smaller size, shorter wings and longer tails mark them out as sparrowhawks.

Females are bigger than males, roughly pigeon-sized, with brown feathers on top, and brown and white bars on their belly. Look out too for their barred tail. Males have a bluish-grey back and wings, and orangey-brown bars on their chest and belly. Both have piercing yellow or orange eyes – unlike kestrels. 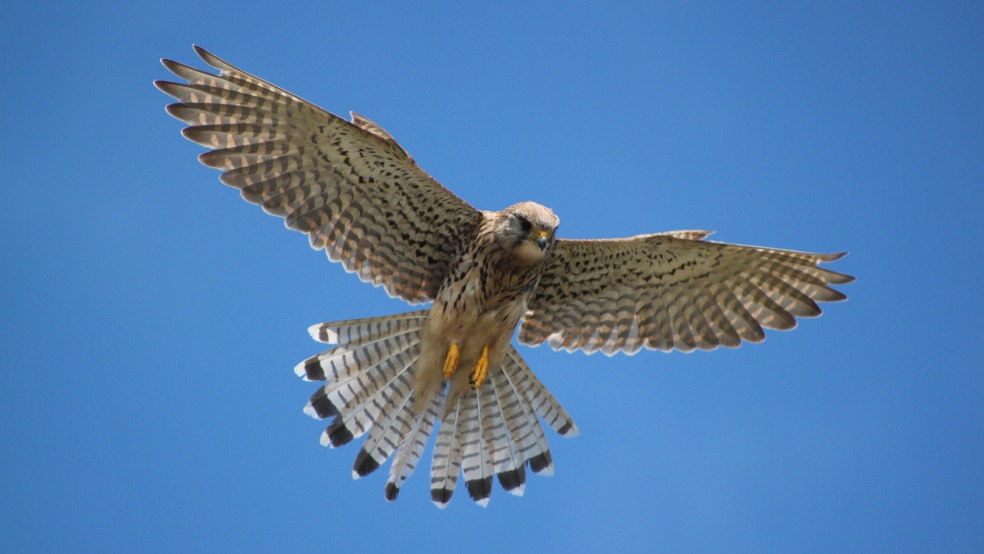 Generally, if it’s hovering, it’s a kestrel! Roughly magpie-sized with a fan-shaped tail, kestrels are the birds you see hovering fantastically, pointed wings outstretched and head firmly focused on its prey below. A word of caution: buzzards are capable of hovering too, but they will be much larger, with slower wingbeats.

Kestrels have supremely keen eyesight. They can also see ultraviolet light, enabling them to track the urine trails of rodents and so pinpoint their favourite food. The bigger females are mainly brown with black bars on their backs and inner wings. Males have a blue-grey head and tail with a brown back. Look out too for a prominent black band at the end of the male’s tail. Seen from above, both males and females have dark brown outer wings, compared with the lighter browns of their inner-wings and backs. 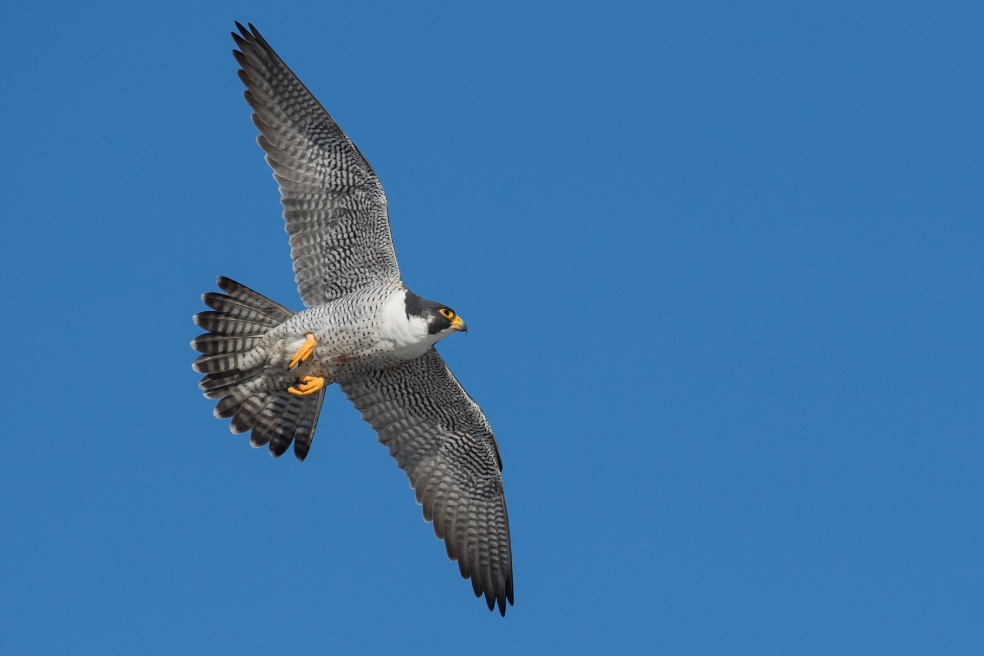 Have you ever gone out for a walk along the coastline and seen a blur of grey racing downwards from the corner of your eye? If so, you may have seen a peregrine falcon hunting for its prey. This ferocious predator has a steel grey head and back, with a paler blueish grey on the tail base and a light belly with dark bars. Its wings are pointed and look rather springy in flight. It breeds mostly on cliff edges and is indisputably the fastest bird in the sky. As it dives down (usually after a pigeon) it can reach a mind-bending speed of 189 mph, which is faster than a bullet train!

Some of our cities are great places to see peregrines. Their high buildings and steady supply of pigeons make them a great choice for nesting and raising chicks. Cities including London, Cambridge, Leicester, Chichester, Durham and Llandaff are all home to nesting peregrines.

For a limited time only! 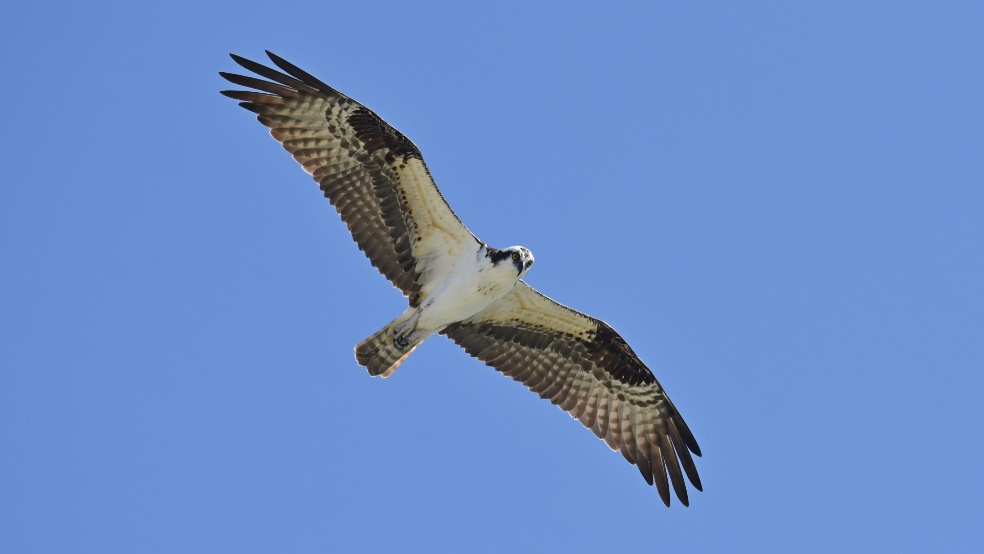 They are powerful hunters that hover high in the air on the lookout for fish. Once a potential prey is spotted, ospreys will either swoop gracefully down and pluck the fish out of the water or descend in stages then dive down directly at speed, often disappearing beneath the surface of the water. Ospreys perfectly adapted talons have evolved to handle the slippery fish, and it’s not uncommon to see an osprey flying away with a fish almost as heavy as the bird itself. The male’s display call over its territory is a ‘ueelp… ueelp… ueelp’.

After years of absence, ospreys are returning to many parts of the UK, and can be seen at a number of sites in the UK, including RSPB Loch Garten in Scotland, the banks of Afon Dyfi, Llyn Brenig and Afon Glaslyn in Wales, and Rutland Water and Poole Harbour in England. Enjoy some instant osprey excitement with our nest cam at RSPB Loch Garten.

Looking out for raptors

Birds of prey are majestic, elegant and a vital part of our ecosystem. However, they’re subjected to persecution, egg theft, and are killed illegally by trapping, poisoning and shooting.

With constant monitoring and surveying, we can help them. If you spot any suspicious or illegal behaviour, please contact your local wildlife crime officer on 101, and report it to the RSPB’s investigation team.